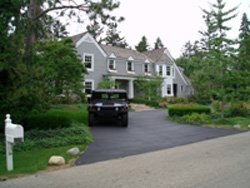 Bloomfield Hills is an affluent city in Oakland County of the state of Michigan, 20.2 miles (32.5 km) northwest of downtown Detroit.[4] As of the 2010 census, the city population was 3,869 Bloomfield Hills consistently ranks as one of the top five wealthiest cities in the United States with population between 2,500 to 9,999 — it currently is listed at the number four position and in 1990 it was ranked number two, and has the highest income of any city outside of California, Florida or Virginia. The median income for a family is over $200,000. In 2000, 49% of residential property in Bloomfield Hills had a value of over $1,000,000.

On June 28, 1820, Oakland County was divided into two townships: Pontiac Township and Bloomfield Township, the latter covering the southern part of the county that would include West Bloomfield Township, Royal Oak and Southfield. What is now Bloomfield Hills was a farming area until the turn of the 20th century when wealthy Detroit residents bought up the land. The settlement became a village in 1927, and in 1932 residents voted to become a city to avoid being incorporated into growing Birmingham.
The origin of the name “Bloomfield” is uncertain. Bloomfield Hills’ former names were “Bagley’s Corners”, after early settler Amasa Bagley, and “Circle City.” 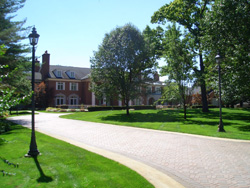 In popular culture, Bloomfield Hills was the setting for the 2005 film The Upside of Anger. Eminem mentions Cranbrook Kingswood in the 2002 movie “8 Mile” He makes fun of “Doc” because he attended Cranbrook, which is not considered cool or impressive in the atmosphere portrayed in the movie. Bloomfield Hills is the hometown of the comic book character, Trance. Out Of Sight with Jenifer Lopez and George Clooney was filmed at a private residence in Bloomfield Hills. Jimmy Hoffa was last seen at the former Machus Red Fox restaurant in Bloomfield Hills. Gilda Joyce: The Ladies of the Lake is set in a private school in Bloomfield.

Bloomfield Hills is home to the Cranbrook Academy of Art, one of the nation’s leading graduate schools of architecture, art and design. It was founded by the Booths in 1932. By 1984, the New York Times would say that “the effect of Cranbrook and its graduates and faculty on the physical environment of this country has been profound. Cranbrook, surely more than any other institution, has a right to think of itself as synonymous with contemporary American design.”The city is served by the Bloomfield Hills School District, a public school district comprising the City of Bloomfield Hills, Bloomfield Township and small parts of neighboring communities. All schools within the district are in Bloomfield Township. The district operates the International Academy, a tuition-free, public consortium high school which offers the IB Diploma Program and is consistently rated by Newsweek magazine among the top ten public high schools in the United States.