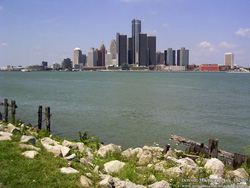 The following is an excerpt from an article in Sunday Free Press, dated August 12, 2012 written by John Gallagher and Greta Guest. “Detroit abuzz as more move in. Influx of workers has streets, shops hopping. Public relations professional David Lilly left New York City two years ago for a downtown Detroit neighborhood that was “a pretty lonely place,” he recalls. Since then more than 10,000 workers have descended on downtown, with hundreds snatching up available rental housing or buying properties as their new home address. With the windfall of employed people, there’s a palpable difference in the look, feel and culture in the greater downtown district. Since the mid 2010, when Quicken moved its first employees downtown from the suburbs to the Compuware Building, about 10,000 new workers have transferred – close to 6,000 with Quicken or its related companies, 3,000 with Blue Cross Blue Shield of Michigan and scattered others with various companies. Newcomers to downtown are sure to learn what Detroit insiders already know: There’s much more to the D than meets the eye. Sure, it’s got the soaring RenCen and sprawling River Walk. But those who venture off the beaten path will discover the hidden gems – little known sites, work of art, eateries and more – that make this city unique.”

Downtown Detroit has seen an increased role as an entertainment hub in the 21st century with the opening of three casino resort hotels, new stadiums, and a revitalized riverfront. The metropolitan region currently holds roughly one-half of the state’s population.

Detroit is the largest city in the state of Michigan, and the seat of Wayne County. It is the major city among the primary cultural, financial, and transportation centers in the Metro Detroit area, a region of 5.2 million people, and serves as a major port on the Detroit River connecting the Great Lakes system to the Saint Lawrence Seaway. It was founded on July 24, 1701, by the French explorer, adventurer, and nobleman Antoine de la Mothe, sieur de Cadillac. 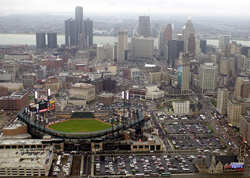 Known as the world’s traditional automotive center, “Detroit” is a metonym for the American automobile industry and an important source of popular music legacies celebrated by the city’s two familiar nicknames, the Motor City and Motown. Other nicknames arose in the 20th century, including City of Champions beginning in the 1930s for its successes in individual and team sport, The D, D-Town, Hockeytown (a trademark owned by the city’s NHL club, the Red Wings), Rock City (after the Kiss song “Detroit Rock City”), and The 313 (its telephone area code) Detroit became known as the “great arsenal of democracy” for its support of the U.S. role among the Allied powers during World War II.