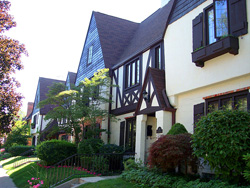 Grosse Pointe refers to a coastal area in Metro Detroit, Michigan, USA, that comprises five adjacent individual communities. From southwest to northeast, they are: 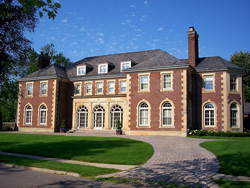 The terms “Grosse Pointe” or “the Pointes” are ordinarily used to refer to the entire area, referencing all five individual communities, with a total population of about 46,000. The Grosse Pointes altogether are 10.4 square miles, bordered by Detroit on the south and west, Lake St. Clair on the east and south, Harper Woods on the west of some portions, and St. Clair Shores on the north. The cities are in eastern Wayne County. The Pointes begin six miles (10 km) northeast of downtown Detroit and extend several miles northeastward, in a narrow swath of land, to the edge of Wayne County. The name “Grosse Pointe” derives from the size of the area, and its projection into Lake St. Clair. 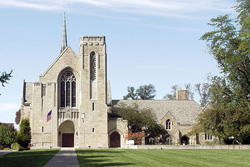 Grosse Pointe is one of the most affluent suburban areas in Metro Detroit, sharing a border with northeast Detroit’s historic neighborhoods. Grosse Pointe has many famous historic estates along with remodeled homes and newer construction. On the coast of Lake St. Clair, the area has a waterfront allure. Downtown Grosse Pointe, along Kercheval Avenue from Neff to Cadieux, nicknamed “The Village,” serves as a central business district for all five of the Grosse Pointes, although each of them (except Grosse Pointe Shores) has several blocks of retail. Downtown Detroit is just over seven miles (11 km) west of this downtown area, accessed by Jefferson Avenue, or several other cross-streets.

The north-south area along Lake St. Clair generally coincides with the boundaries of the two high schools. The southern areas (basically south and west of Moross Road) feature retail districts.

Grosse Pointe, recognized for its historic reputation for scenery and landscape, has grown from a colonial outpost and a fertile area for small orchard owners and farmers to a coastal community with prime real estate chosen for grand estates.